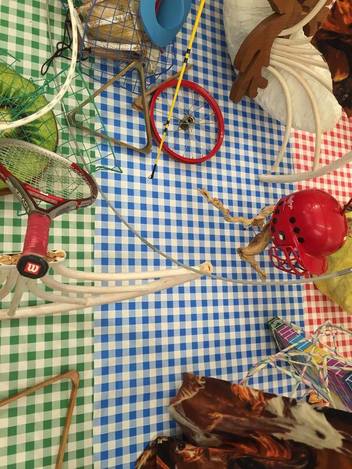 Waiting Places, 2017, is an interactive sound and sculpture installation that invites viewers to stack, join, scatter, balance, organize and re-arrange, materials provided by Brianna Rigg to alter a soundscape composed and performed live by Michiko Ogawa.

The materials included in Waiting Places have been collected by Brianna over the past few years. This collection of objects is comprised of gifts from John Brady; old student projects left behind at USD, where Brianna teaches; failed sculptural materials that never made it into Brianna's more formal body of work; and treasured components of Brianna's current and past sculptures. All of these objects are chosen for their potential to combine with other objects. They are intended to provoke the imagination of the viewer and to guide them toward an awareness of the infinite malleability and form and meaning.

Michiko Ogawa's composition was made in response to this collection of objects. Michiko organized the objects into categories and created a sound for each. Paying close attention to the character and form of objects in each category, Michiko tried to detect the will the of the objects and composed sounds to bring out their voice. These sounds are played simultaneously on loops and manipulated by Michiko to come forward and recede in response to viewer interaction.